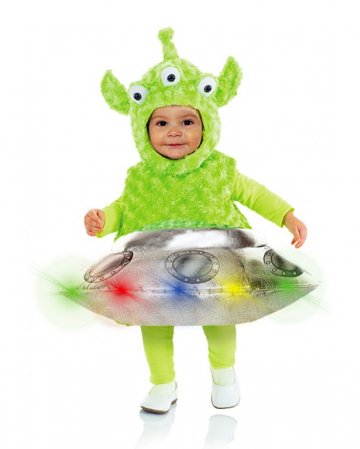 Item #: 38656
❤  Add to wish list
(0)
UnavailableOrder fast! Only a few items left Available
Fitting for this:
Add the product directly to your basket by clicking the checkbox

Cute Alien with saucer as spaceship with LED lighting

Your offspring is not of this world. So galactically sweet, you can't refuse him a wish. The Alien & Ufo with LED's toddler costume turns your treasure into a cute alien. With this, Alf and Co. can pack up. It doesn't get cuddlier than this. As an alien, your little angel mixes up the children's carnival in the kindergarten and provides interplanetary highlights in green and silver. This makes the carnival a spacy happening for your darling.

The Alien & Ufo with LED's toddler costume is an especially original variation of the costume of an alien hugging monster. The cute costume overall is green and has a hood that shows a cute alien face. The little monster from the planet of the sweet tooth has three eyes and funny green ears. But the special thing about this costume is the spaceship, which carries the alien on its body. It is silver and inspires by the LED's, which flash in different colors. You can put these Hair Ripe With Green Bobbleson when you take your treasure to the carnival or carnival parade.