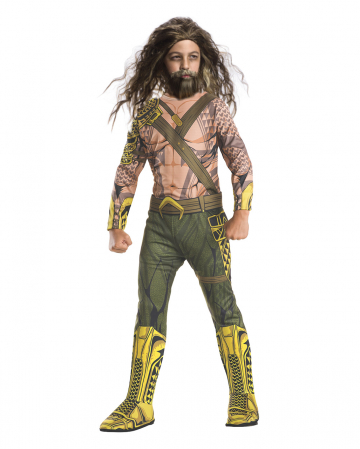 Item #: 31177
❤  Add to wish list
(0)
Reduced from 29,95 €incl. VAT, plus shipping
UnavailableOrder fast! Only a few items left
Delivery until 16.05. possible**
Available
Delivery until 16.05. possible**
** Only for deliveries inside germany, information about other countries can be found here
Fitting for this:
Add the product directly to your basket by clicking the checkbox

Aquaman - The hero between two worlds. Both on land and in the water, the DC Comics superhero has to face some adventures. Comic-Aquarius, a member of The Justice League alongside The Flash, Wonder Woman & Superman among others, has become one of the most popular super heroes with his outstanding skills. He swims faster than any fish, can breathe underwater and has telepathic powers. Disguise your child as a ruler of the deep sea - the Aquaman Kids Costume Deluxe is a licensed costume from "Batman vs. Superman and a really cool costume for Halloween & children's carnival.

The Aquaman Kids Costume Deluxe consists of a skin-colored, padded jumpsuit with olive-colored applications and attached 3D-shoulder strap. A pair of gloves, as well as 3D boot covers are also included in the costume. The soft padding ensures the highest wearing comfort, so that your offspring in his superhero costume can fully concentrate on saving humanity. Thanks to the 3D applications, the Aquaman cover looks incredibly realistic. You can find that too Aquaman Kinderkostüm in our selection.