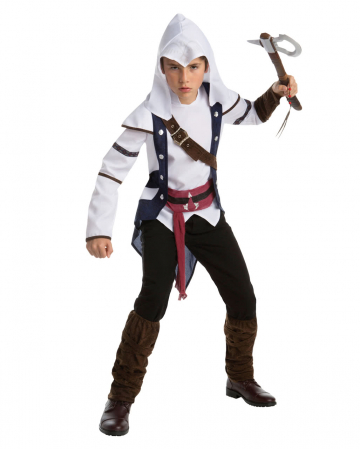 Item #: 27979
❤  Add to wish list
(0)
Reduced from from 43,95 €incl. VAT, plus shipping
UnavailableOrder fast! Only a few items left
Delivery until 25.01. possible**
Available
Delivery until 25.01. possible**
** Only for deliveries inside germany, information about other countries can be found here
Fitting for this:
Add the product directly to your basket by clicking the checkbox

Transform with your Assassins Creed Connor Teen costume in Connor Kenway aka Ratonhnhaké: ton, half Briton, half Mohawk, and let yourself be trained by the legendary Achilles Davenport as an assassin. A wonderful costume for upcoming Halloween parties, Games Conventions and Mottopartys!

The Assassins Creed Connor Teen Costume consists of a top, a belt and boot cuffs. On the white top of the assassin panel with imprinted buttons is the characteristic, also white hood. A wide, red fabric belt with a printed clasp is loosely tied around the hips. Brown boot cuffs round off the Assassin's Creed III license costume. This is what the Blunderbuss pirate pistol 100 rounds and the Indian Tomahawk ,

The article is a costume and not a toy. Not suitable for children under 12 years. Can contain small parts that can be swallowed - danger of suffocation. Keep away from fire and open flames.