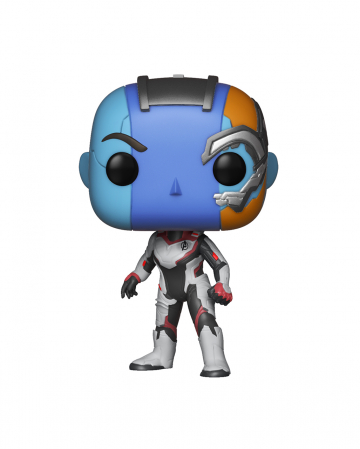 The Avengers Endgame - Nebula Funko POP! Bobblehead figure is a great gift for all fans of the celebrated Marvel heroes. The world holds its breath when the Avengers fight on canvas against Thanos. No question that they are revered for their courage and strength. Even his daughter Nebula opposes the madness and fights against her own father together with Iron Man, Gamora and Co. Which Marvel fan would not like to put such a cool heroine on the shelf.

Whether it's the Avengers or the Guardians of the Galaxy, Thanos' dodgy foster daughter makes Avengers Endgame - Nebula Funko POP! Bobblehead figure mighty impression. In the typical style of Funko Pop! She is so irresistible to anybody who loves the adventures of Star Lord, Groot, and Co., so big heads and small bodies. The big eyes of the Marvel heroine look so determined that you want to bow down right away. The merchandise figure from the Marvel Universe is made of vinyl and therefore just as resistant as the character of the Nebula. Its size measures about 10 cm. More cool fan articles from Funko POP! as Avengers Thor Funko Pop! Bobble Head Of course, there is also the horror shop. Just browse!