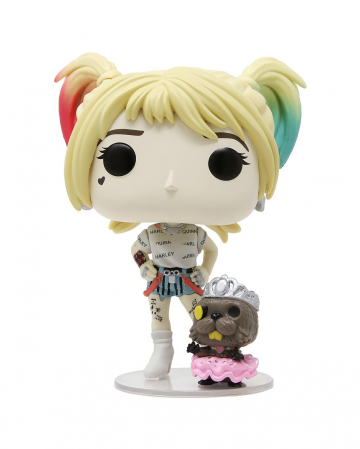 The Birds of Prey are a team of female DC Comics anti-heroes who take on the evil villain Black Mask. Among them is the psychopath Harley Quinn, known from Suicide Squad. If you're also a huge fan of "Daddy's lil' Monster", this licensed Birds of Prey Harley and Beaver is funko pop! Figure the right one for you. Also as a gift for Harley Quinn fans this DC Comics vinyl figure is a great surprise!

The Birds of Prey Harley and Beaver Funko POP! figure is a licensed Harley Quinn merchandise item for collecting, trading and giving away. But the Harley Quinn figure doesn't come alone: A little beaver in a tutu is included. This Birds of Prey fan article comes in a gift box and is about 10.5 cm high. Also the Batman Harley Quinn Funko Pop! Figure