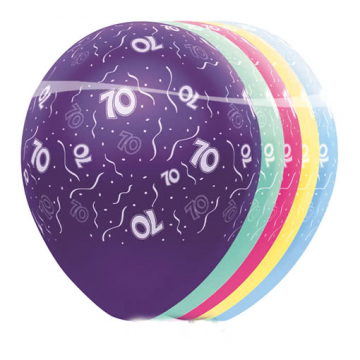 Item #: 8802145
❤  Add to wish list
(0)
1,95 €incl. VAT, plus shipping
Grundpreis: 0,39 €/piece
UnavailableOrder fast! Only a few items left
Delivery until 12.05. possible**
Available
Delivery until 12.05. possible**
** Only for deliveries inside germany, information about other countries can be found here
Fitting for this:
Add the product directly to your basket by clicking the checkbox

Colorful party balloons in metallic optics for the anniversary

With the birthday balloons 70 you have a great party deco for your 70th birthday or another 70th anniversary. The colorful balloons are a real eye-catcher for any anniversary party and make the right thing with their metallic look and white print.

Colorful balloons like these birthday balloons 70 are the ideal party decoration for various anniversaries - whether filled with air or helium, the metallic balloons with imprinted "70" numbers, confetti and streamers fulfill their decorating purpose. Each pack contains a purple, a turquoise, a pink, a yellow and a blue birthday balloon. The matching table decoration for the 70th birthday form the Birthday napkins number 70 and the Anniversary number 70 gold ,

Balloons are not suitable for children under 6 and always require adult supervision. Keep away from the eyes. The use of a balloon pump is recommended. There is a danger of suffocation if swallowed balloons are deflated. Burst balloons should be removed immediately.