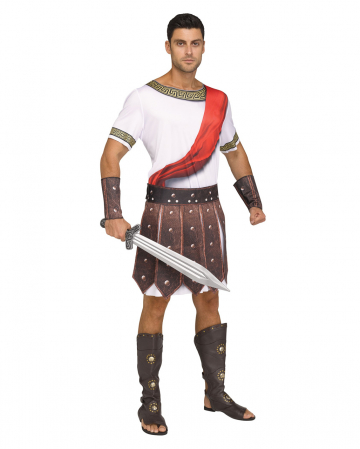 Dress up for carnival & carnival in the Roman Emperor

He came, he saw, he won! Become the Roman Emperor with the Caesar costume and master the carnival party. The others will be at your feet and will obey all your wishes. Also at the costume party and the motto party you are the undisputed emperor who decides who may enter the dance floor and who is unworthy of them. With your appearance as the most famous Roman emperor in history, you send gladiators to the arena to fight for life and death. Or get you a beer. And the ladies will feed you grapes and cheese cubes to win your favor. Sounds good to me?

Then grab the ancient Roman disguise set and become the Roman Emperor! The Caesar costume in the One Size for men helps you to an impressive appearance. It'll make you emperor in no time. Just put the costume over your head and you look like a George Clooney in the movie "Hail Caesar! The realistic photo print on the fabric looks like the old Roman robes with tunic and apron. With the Roman Sandal Brown and the Laurel Wreath Headdress you can complete your outfit.

Attention: The article is a costume for adults and not a toy. Not suitable for children under 3 years. May contain small parts that may be swallowed - risk of suffocation. Keep away from fire and open flames.