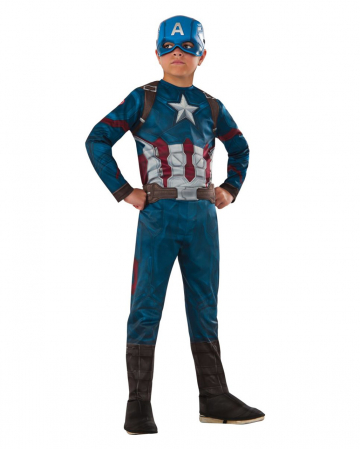 Jump into the fight against Helmut Zemo dressed up in our Captain America Civil War children's costume! Embody Steve Rogers aka Captain America at the upcoming carnival celebrations, superhero theme parties and conventions with the licensed Marvel Jumpsuit!

The Captain America Civil War children's costume consists of a jumpsuit with boot tops, a belt and a mask. The jumpsuit of the superhero disguise is in the well-known blue-silver style of the Marvelcomic template and gives you immediately the appearance of the Avengers superhero. Boot tops, which you can easily put over your own shoes, ensure a successful disguise as a Marvel-Comicheld from head to toe. The characteristic half mask with the typical "A" rounds off your superhero disguise. The belt is simply tied around your waist and completes your appearance as Captain America. The Captain America Shield for children and the . Captain America Shield Pillow

Attention: The article is a costume and not a toy. Not suitable for children under 3 years. May contain small parts that may be swallowed - risk of suffocation. Keep away from fire and open flames.