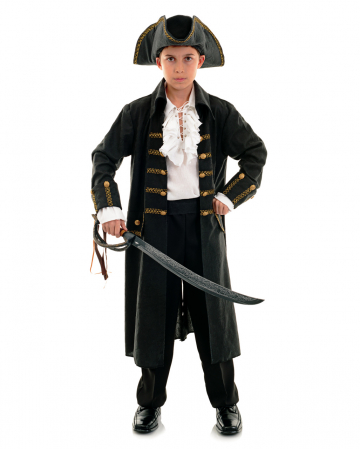 Item #: 31375
❤  Add to wish list
(3)
Reduced from 43,95 €incl. VAT, plus shipping
UnavailableOrder fast! Only a few items left
Delivery until 12.05. possible**
Available
Delivery until 12.05. possible**
** Only for deliveries inside germany, information about other countries can be found here
Fitting for this:
Add the product directly to your basket by clicking the checkbox

Jack Sparrow can pack. As a pirate, you are now the number one on the seven seas. With the Captain Black Pirates costume you look like a real pirate, which you can't fool. With your brave pirate gang you will capture the greatest camel treasures at Carnival. Everyone wants to be in your team at the children's carnival at school, because they know how brave and clever the black captain is with his sword and his three-cornered head. Ahoy! will call the others when you celebrate your next birthday under the motto "pirates and pirates".

Whatever you're up to at a carnival, Halloween or costume party, dressing up in the Captain Black Pirates children's costume is ideal to make you feel like a smarter version of the funny captain from "Pirates of the Caribbean". The costume consists of five parts, first you put on the white shirt with the typical white frills. To do this, put on the brown trousers and put on the pirate coat decorated in gold. Of course, the brown pirate hat, which is kept in the classic triangular shape, is not missing in this great pirate children's costume. You will find many more cool accessories for your pirate adventures. For example, you would also look good with the Pirate Eye Patch with Skull and that s Pirate Gold 72 Pieceshould not be missing.

Not suitable for children under 3 years. Contains small parts that can be swallowed. There is a risk of suffocation.