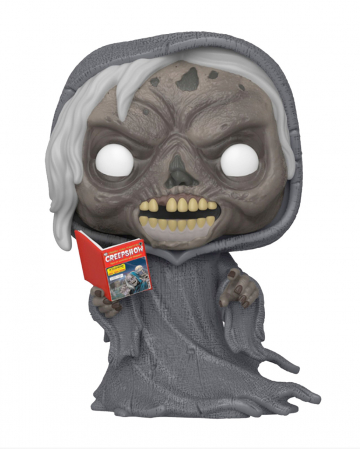 Item #: 39401
❤  Add to wish list
(0)
Reduced from 14,99 €incl. VAT, plus shipping
UnavailableOrder fast! Only a few items left
Delivery until 01.12. possible**
Available
Delivery until 01.12. possible**
** Only for deliveries inside germany, information about other countries can be found here
Fitting for this:
Add the product directly to your basket by clicking the checkbox

Licensed The Creep figure as a gift for Creepshow & Horror fans

Get a nice licensed item from the film of the same name by director George A. Romero and screenwriter Stephen King with our Creepshow The Creep Funko POP! figure! The creepy reader is an absolute must-have for every collector and a great gift idea for Creep fans!

The Creepshow The Creep Funko POP! figure has a size of about 9 cm. Optically, the Creepshow fan article corresponds in every detail to the template from the episodes of "The Creepy Crazy witching hour" with a grey, tattered hoodie, white hair, tooth gap and nasty white balls instead of the eyes. In his hands the Creep holds a horror comic called "Creepshow" from which he reads Billy. Your Creep collectible is delivered in a nice gift box with a window. More horror movie gift ideas and fan articles in funko style like these Horror Movie Funko Pop! Ballpointand more can be Funko 5 Star Vinyl Figure - Michael Myersfound at Horror-Shop.com!

Not suitable for children under 3 years. May contain small parts that can be swallowed - danger of suffocation. Keep away from fire and naked flames.