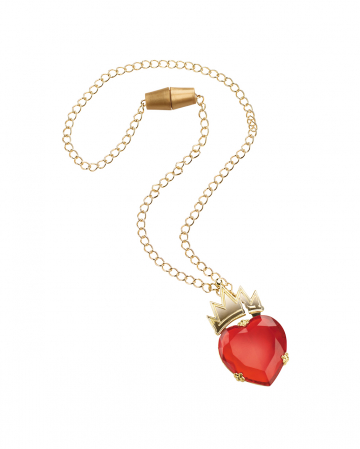 Descendants Evie´s costume jewellery from the movie "The descendants

Once upon a time, Disney characters were divided into good and evil. Since Belle and the Beast were elected kings of Auradon, all the kingdoms over which they now rule have united. The villains, however, like Maleficent, Jafar and Queen Grimhilde, were banished with all the other Disney villains to the isolated "Island of the Lost", where their magic powers are ineffective. There they also got their descendants, which now, 20 years later, get the chance to get to Auradon in the kingdom. Evie - the daughter of the evil queen Grimhilde - is with her. Together with their rogue friends they do a lot of mischief in Auradon.

With the Disney Descendants Evie´s children's necklace you have found a pretty Descendants costume jewellery of the daughter Grimhilde´s . The movie heroine wears the pendant to match her outfit and looks great with it. Evie´s Necklace with red heart stone is a Disney licensed article. The red heart is gold embraced and worn on a gold necklace. Discover even more costume jewellery, such as necklaces with gemstones, rings or bracelets. Here you can also find the Princess Tiara with gemstones