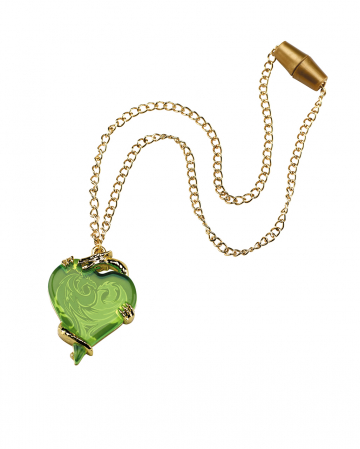 Item #: 37320
❤  Add to wish list
(0)
UnavailableOrder fast! Only a few items left Available
Fitting for this:
Add the product directly to your basket by clicking the checkbox

Descendants Mal costume jewellery from the movie "The descendants"

Once upon a time, Disney characters were divided into good and evil. Since Belle and the Beast were elected kings of Auradon, all the kingdoms over which they now rule have united. The villains, however, like Maleficent, Jafar and Queen Grimhilde, were banished with all the other Disney villains to the isolated "Island of the Lost", where their magic powers are ineffective. There they also got their descendants, which now, 20 years later, get the chance to get to Auradon in the kingdom. Mal is there too - the daughter of the evil fairy Maleficent, who is commissioned by her mother to ensure that evil regains power. As a typical teenager, the crazy girl is much more occupied with her swarm of Ben, the prince of Auradon...

With the Disney Descendants Mal´s heart pendant necklace you have found a pretty Descendants costume jewelry the tough time. The movie heroine wears the pendant to match her outfit and looks great with it. Mal´s Necklace from Descendants is a Disney licensed article. The green heart is golden embraced and worn on a golden necklace. Discover even more costume jewellery, such as necklaces with gemstones, rings or bracelets. Here you can also find the Princess Tiara with gemstones

The article is a costume accessory for adults and not a toy. Not suitable for children under 3 years. May contain small parts that may be swallowed - danger of suffocation. Keep away from fire and open flames.