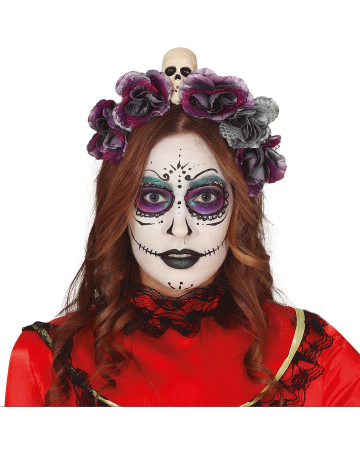 Item #: 39096
❤  Add to wish list
(0)
UnavailableOrder fast! Only a few items left Available
Fitting for this:
Add the product directly to your basket by clicking the checkbox

Flowery costume accessory for the Day of the Dead

The "Dia de los Muertos" is a Mexican festival in memory of the deceased. In contrast to many other cultures, the Day of the Dead is a very joyful festival there, where people dance, sing and eat well. The preparations for the cheerful festival of the dead already begin in October and young and old alike make their contribution. In order to welcome the deceased, colourfully painted sugar figures such as gravestones and skulls are made. These "Sugar Skulls" decorate the houses, displays and streets in addition to flowers and ribbons. The positive vibe of the Mexican "All Souls' Day" is also becoming increasingly popular in our country. For Halloween just wear a nice "Day of the Dead costume" from our shop and the Dia de los Muertos skull hairband with flowers as a chic accessory!

You get the Dia de los Muertos skull hairband with flowers as a Day of the Dead costume accessory for Halloween. The pretty headdress is decorated with grey and purple flowers. In the middle there is a realistically crafted skull and crossbones that will add the finishing touch to your Dia de los Muertos accessory. Discover also our Voodoo Skelett Kostüm-Ponchoor the Queen Of The Dead Costume