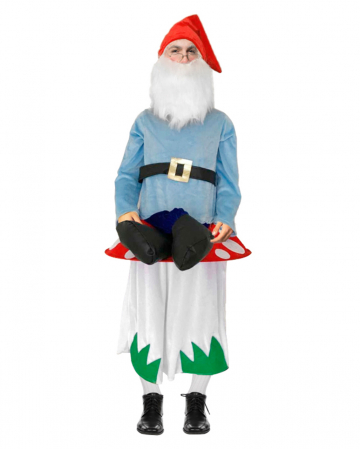 Item #: 36476
❤  Add to wish list
(0)
from 63,99 €incl. VAT, plus shipping
UnavailableOrder fast! Only a few items left
Delivery until 26.10. possible**
Available
Delivery until 26.10. possible**
** Only for deliveries inside germany, information about other countries can be found here
Fitting for this:
Add the product directly to your basket by clicking the checkbox

Gnomes and trolls are funny creatures who really stir up every bachelor party and every carnival party. In the hilarious dwarf on mushroom men costume you turn into a funny Klabauter who sits quite chilly on a giant mushroom. The highlight: Your legs are inside the mushroom and two fake dwarf legs dangle down. This men's dwarf costume is a real eye-catcher that will make you laugh at every carnival party. Find more crazy fairy tale costumes for men, women and kids at Horror-Shop.com!

You get a colorful dwarf on mushroom men costume for carnival & theme party. The Klabauter costume for men consists of a dwarf costume with a sewn-on belt and a red goblin cap. The mushroom hat is at hip height. When you slip in, your legs form the foot of the mushroom. Two dwarf legs are attached to the mushroom, which appears to be your own short pedals. As a fairytale carnival costume for men, the Kobold men's disguise with mushroom is a real roar! This one looks White Beardsuper funny!

The article is a costume for adults and not a toy. Not suitable for children under 3 years. May contain small parts that may be swallowed - danger of suffocation. Keep away from fire and open flames.