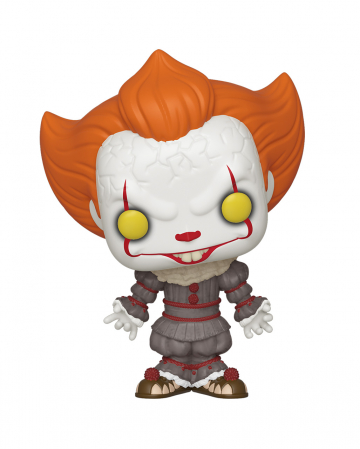 The child eating clown Pennywise strikes again in the second part of the remake of Stephen's King´s ES. The horror clown with the nasty grimace and the perfidious humor is the embodiment of absolute evil - no wonder that the children Derry´s do everything to put an end to the horror. With the ES - Pennywise with open arms Funko Pop figure you run straight into the arms of the creepy clown. Can you escape him in time, or will you also become a victim of his death lights? Secure the licensed IT gift and greet the little Pennywise in your Funko Fan Shelf!

Funko Pop is known for its high-quality vinyl figures. Also this Pennywise Funko figure is a very special one, which will expand your collection. The ES fan article shows the horror clown Pennywise with yellow eyes and open arms - as if he was about to greet his next victim, who followed the scent of the circus. The Funko Pop Pennywise gift figure is about 10 cm high and presents itself in the characteristic clown costume and orange hair. You can IT Ultimate Pennywise Well House Action Figure 18cmfind even more IT Fan-Merch like ours on Horror-Shop.com!

The article is not a toy. Not suitable for children under 3 years. May contain small parts that may be swallowed - danger of suffocation. Keep away from fire and open flames.