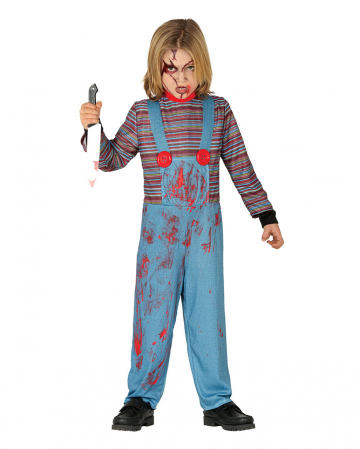 Halloween Child Costume For The Trick Or Treat

With the evil murder puppet children costume your offspring has murderous fun at trick or treat. They're collecting candy and scaring it to death. We know that dolls can also be evil, at least since the movies around Chucky, the murder doll. In the Halloween costume of the nasty killer doll your child will now bring the hearts of the neighbors to knock. But like all small children and killer dolls, the evil shoots can be soothed with chocolate and sweets.

The Evil Murder Puppet Children Costume is an ingenious Halloween children costume for the Trick or Treat. In the style of the well-known killer doll from film and television your child wears the blue dungarees with the red buttons and the ringed sweater under it. Only the many bloodstains on the dungarees betray the murderous intentions. And of course you can Chucky half maskpimp the scary night children's costume Blood Gel 60mlas well.

Attention: The article is a costume and not a toy. Not suitable for children under 3 years. May contain small parts that may be swallowed - danger of suffocation. Keep away from fire and open flames.