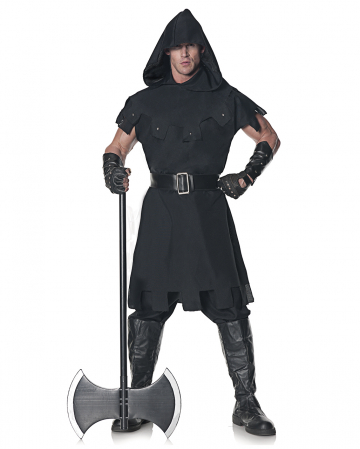 Disguise yourself as a hangman from the Middle Ages

Before the hatchet was invented, the executioners had to do all the work by hand. Executioners were ostracized for their craft by society, so the executioners hid their faces in dark hoods. The execution with the ax was also not fast, with Queen Maria Stuart the hangman had to strike three times. In the executioner costume, you become part of this sinister guild.

The executioner mens costume consists of a tunic, pants, a hood with collar, a belt and arm warmers. All parts of the costume are black. The short-sleeved tunic reaches down to the knees. The hood is pulled over it, the collar of the hood is like the hem of the tunic cut out square, which gives them a medieval look. On each of the small squares on the hood is a silver square rivet embedded. The arm cuffs made of artificial leather also have such rivets. The belt is tied around the tunic, the pants are held by an elastic band. As a tool you need the ancient Kriegeraxt , on Big Two-Handed Sword and, if nothing works, one Torture Bone ,

The item is made for adults and is not a toy. Not suitable for children under 3 years. Contains any small parts that can be swallowed. There is a danger of suffocation.