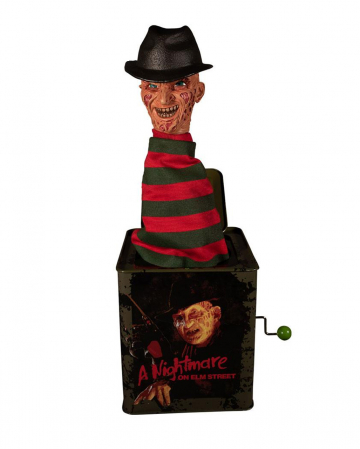 This Freddy Krueger Burst-a-Box collector's figurine from "A Nightmare on Elm Street" is an impressive gift for all Freddy fans. The creepy jumping devil with burn scars and hat comes from Mezco's "Burst-A-Box" series and definitely belongs on every horror movie collector's shelf! From Elm Street, the Freddy Jack-in-the-Box figurine comes straight to your home - gift box included!

Licensed movie figurines from Mezco like this Freddy Krueger Burst-a-Box collector figurine and her friends Scarred Chucky Burst-a-Box Collectible Figurine 36cmand Jason Voorhees Burst-a-Box Collector's Figurine 36cmare especially popular in the horror scene. The Freddy jumping devil from Elm Street jumps out of his box when you turn the crank handle. Additionally the Freddy Krueger figure has a hat, which you can put on the (Alb-)dream man after jumping out. The included gift box makes the Freddy figure a wonderful gift among horror fans.

The article is for adults and not a toy. Not suitable for children. May contain small parts that can be swallowed - danger of suffocation. Keep away from fire and open flames.