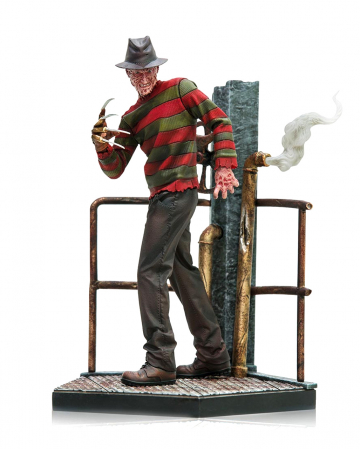 Item #: 50292
❤  Add to wish list
(0)
Reduced from 239,95 €incl. VAT, plus shipping
UnavailableOrder fast! Only a few items left
Delivery until 12.04. possible**
Available
Delivery until 12.04. possible**
** Only for deliveries inside germany, information about other countries can be found here
Fitting for this:
Add the product directly to your basket by clicking the checkbox

Freddy Krueger, one of the greatest icons of horror movies, is the main character of the "Nightmare on Elm Street" franchise. As a child murderer, he was burned alive by his vengeful parents and came back as an evil spirit who murders teenagers in their dreams and then in the real world.

Immortalized by actor Robert Englund, who played him in nine films, Freddy Krueger is now the newcomer in the Iron Studios' horror series in art scale 1:10. Characteristics such as the clawed glove, floppy hat and red-green striped sweater make the Freddy figure a must-have for fans and collectors. The Freddy Krueger fan article was cast out of high-quality polyresin, painted by hand and based on original film references for a detailed depiction of the Lord of Nightmares. This limited edition includes an elaborate diorama base that will make every fan's heart beat faster! Even more Freddy collectibles and accessories like the Freddy Krueger Metal Glove Deluxe and the Freddy Krueger Mask Deluxe Nightmare 4 are also available at Horror-Shop.com!