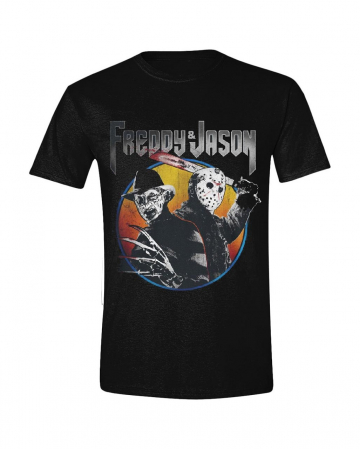 Item #: 36575
❤  Add to wish list
(0)
from 18,99 €incl. VAT, plus shipping
UnavailableOrder fast! Only a few items left
Delivery until 21.04. possible**
Available
Delivery until 21.04. possible**
** Only for deliveries inside germany, information about other countries can be found here
Fitting for this:
Add the product directly to your basket by clicking the checkbox

Get a cool fan article about Ronny Yu's cult horror movie with our Freddy vs. Jason - Concert Print T-Shirt! The shirt with Jason Voorhees with machete and Freddy Krueger with claw hand is an absolute must-have for all fans and collectors!

The Freddy vs. Jason - Concert Print T-Shirt captivates with its cool design. Appropriately kept in black, the fan shirt in color Jason with its characteristic ice hockey mask and machete shows together with Freddy Krueger including a typical floppy hat and claw hand. In grey gradations the title "Freddy vs. Jason" is emblazoned over the horror film merch in the style of a concert poster. Even more Freddy and Jason fan articles like the Funko Pint Size Heroes Horror Figure and that Camp Crystal Lake Shield we also have at Horror-Shop.com!