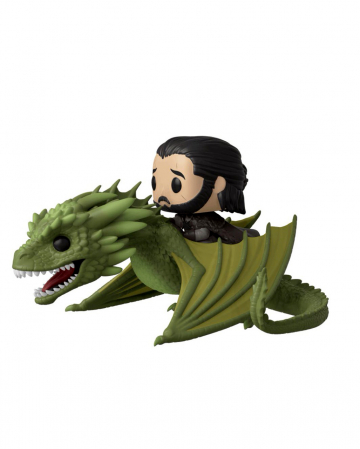 The Funko POP Rides - GoT Jon Snow with Rhaegal is the crowning glory for every GoT fan collection. Jon Schnee is one of the most popular characters of the series hit "Game of Thrones. The fight against the cruel Night King and his zombie army, the losses of the Stark family - many are feverish with the smart man from the north. And everyone wonders if the leader of the Night's Watch will ascend to the iron throne. The character, which was based on the events of the last season, in which Jon Snow rides the dragon of Daenerys Targaryen, is therefore a mega horny gift for all fans of the stories of George R.R. Martin.

The Funko POP Rides - GoT Jon Snow with Rhaegal is a special decoration, which makes the windowsill, the table or the shelf of every fan a highlight. The decoration figure is worked like all Funko figures in detail. The dragon shows even the teeth, and also the tongue is to be recognized well. Just as detailed is the figure of Jon Snow, who rides on the kite and looks a bit insecure. The facial expression is perfectly modelled on that of the actor Kit Harrington in his role as Aegon Targaryen. The figure is made of vinyl and therefore very robust. More great fan articles from GoT such as the Jon Snow Keychain Pocket POPone you can find in our shop.