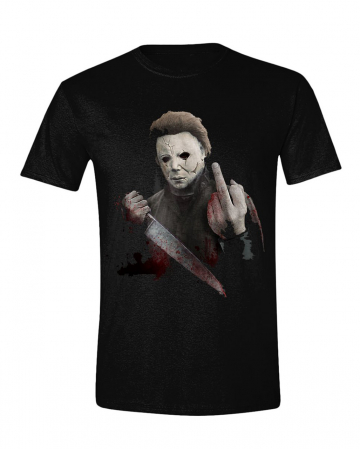 Item #: 37366
❤  Add to wish list
(0)
from 18,99 €incl. VAT, plus shipping
UnavailableOrder fast! Only a few items left
Delivery until 26.10. possible**
Available
Delivery until 26.10. possible**
** Only for deliveries inside germany, information about other countries can be found here
Fitting for this:
Add the product directly to your basket by clicking the checkbox

The Halloween - Michael Myers Mittelfinger T-Shirt is a cheeky statement for all fans of the legendary film series. The killer stretches his middle finger towards his opponent. Why is he doing this? Because he's expressing that no one can defeat him. Michael Myers keeps getting up. Whether you burn it, cut it in four, or bury it. With the enjoyable T-shirt you can be seen at any Halloween or theme party.

After all, it shows that you're just as casual as the killer in John Carpenter's film. The Halloween - Michael Myers middle finger t-shirt is on pure cotton. On the black background you can see the killer of the famous film series, Michael Myers, who not only made Jamie Lee Curtis scream. Besides his bloody knife you can also see his outstretched middle finger on the shirt. The t-shirt is available in many different sizes.