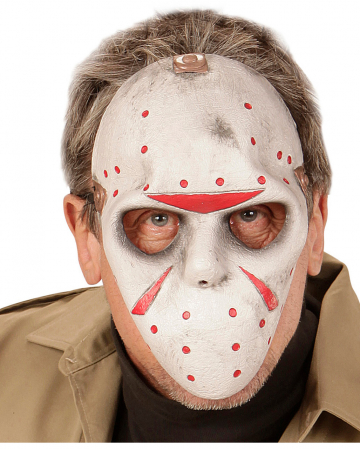 When seeing the Hockey Killer Mask most people don't think about the next ice hockey game of the Eagles Mannheim against the Cologne Sharks. Most of them rather have a shiver running down their spines because they suspect Jason Vorhees behind the creepy mask. The serial killer from the Friday of the 13th series is unkillable. And so he soon not only haunts through the 12th sequel, but also onto the dance floor of the next Motto Party. And also at carnival the killer has his fun scaring people.

He just wants to play! Anyway, the hockey killer mask hides your murderous intent. The rigid vinyl mask is beige with red dots and stripes. Plain and yet extremely creepy when you think about how mercilessly Jason slaughters his way through the teenagers of Camp Crystal Lake and later through other places. If you Jason Voorhees Axeswing that to our spooky Halloween mask, there will be no stopping you. The place at the bar is yours!