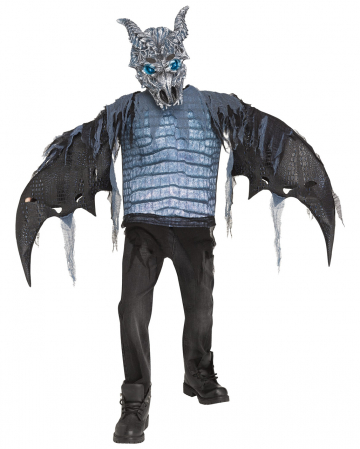 Item #: 31040
❤  Add to wish list
(0)
from 49,95 €incl. VAT, plus shipping
UnavailableOrder fast! Only a few items left
Delivery until 07.05. possible**
Available
Delivery until 07.05. possible**
** Only for deliveries inside germany, information about other countries can be found here
Fitting for this:
Add the product directly to your basket by clicking the checkbox

With the ICE Dragon Kids Costume with LEDs you will make an amazing show at the Carnival or Halloween Kids Party. The glowing LED eyes will make sure the others kneel down in front of this mighty Ice Dragon standing in front of them. And when he spreads his mighty dragon wings, there is no stopping him. Awakened in awe, the others are sure to give you all their sweets. Whether you have the delicious sweets collected on Halloween or at the carnival parade, does not matter. The only certainty is that you are the highlight of the street with this impressive fantasy kids costume. And also at the themed party with the theme of fantasy and fairy tales, the dragon costume is an ingenious eye-catcher.

No wonder! With these gripping details that the Ice Dragon Kids Costume has to offer with LEDs, you do not even know where to look first. Let's start with the cape. This is located on the ice blue top that you can easily pull over your head. The shrine wings look particularly blatant when you lift your arms. Then it looks like the dragon is spreading its wings. Meanwhile, your face disappears behind the half-mask, which shows the face of a dragon. The dragon looks very dark with its ice gray furrows and horns. And who is still not impressed, you sparkle with the glowing LED-eyes. Maybe you would like to fit in with it Dragon Tattoo carry. Or you rather stand on the other side and fight with the Drachentter Double Ax against the dragon world.