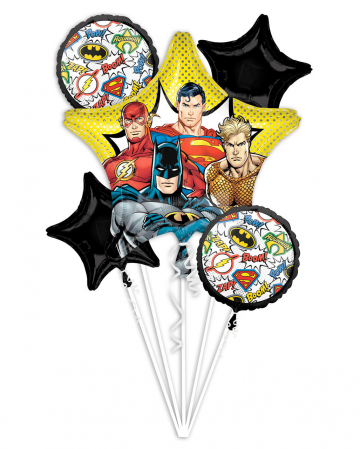 Nice set of 5 different balloons for a successful birthday party

The Justice League DC Foil Balloon Bouquet is a very special gift for all fans of the Justice League heroes from the movies. In the movies Batman and Superman fight for justice after some quarrels together with Wonder Woman, Aquaman and The Flash. If your offspring like the superheroes from the DC Comics, then it's clear what the motto of the next children's birthday party will be. Decorate with the superheroes and make for an unforgettable day that is all about Superman and Co.

The Justice League DC Foil Balloon Bouquet is the ideal decoration set for the perfectly decorated motto party. The Justice League Party Balloon Set consists of a star-shaped foil balloon on which Superman, Batman, The Flash and Aquaman can be seen. All of them of course in heroic pose. On two more foil balloons you can see the logos of the DC Comic heroes. The Justice League Merchandise Balloons are complemented by two cool black stars.

Attention: Not suitable for children under 3 years, as small parts can be swallowed. The foil balloon will be sent unfilled and can be filled with helium or air by you later.