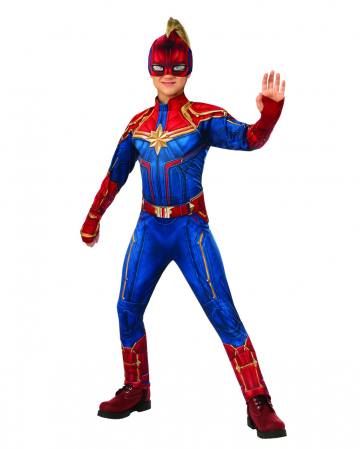 Licensed disguise of the famous Marvel comic and film heroine

What would the Avengers be without the super power of the galactically strong Carol Danvers? With the Marvel - Captain Marvel children jumpsuit costume you become the great movie heroine. So strong that she can lift a truck, run faster than a cheetah and shoot energy out of her hands. And she can fly, too. Against your appearance at the children's carnival, the gentlemen Thor or Iron Man can hide behind the cake buffet. You and your magical appearance as a cool Marvel film heroine is so easy no one comes close.

Whether it's a children's birthday party or carnival, the Marvel - Captain Marvel Kids Jumpsuit Costume makes you the strongest Marvel movie heroine ever. The jumpsuit made of bright red and blue fabric is easy to put on. The golden applications on the costume suit complete the look of Captain Marvel. Captain America Shield KidsFind more awesome Avengers movie costumes and gifts like these in our shop.