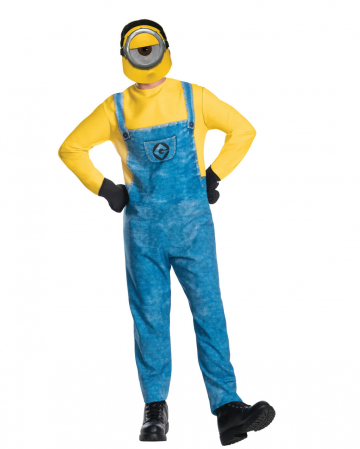 Item #: 27542
❤  Add to wish list
(0)
Reduced from 39,99 €incl. VAT, plus shipping
UnavailableOrder fast! Only a few items left
Delivery until 29.11. possible**
Available
Delivery until 29.11. possible**
** Only for deliveries inside germany, information about other countries can be found here
Fitting for this:
Add the product directly to your basket by clicking the checkbox

Dress up with our Mel Minion costume as a small revolver against Gru and his politics of righteousness! A life so completely without crimes seems to the minions to be boring - so be the little crooks around you on the upcoming Halloween celebrations, conventions and Minion Mottopartys!

The Mel Minion costume consists of a jumpsuit and a half mask. The jumpsuit with yellow top and stylized Blaumann visually corresponds to the film template from "Ich - Einfach incorrigibly 3" resp. From the cartoon spin-offs "Minion". Black gloves as well as a halfmask in the characteristic Minions look with a large magnifying glass and enlarged eyes behind round off the Halloween costume. The half mask of the comic strip is attached uncomplicated by means of elastic drawstrings at the back. Even more cartoon costumes like that Shrek Costume Deluxe and the Bugs Bunny Costume We also have in the horror shop. com!

Attention: The item is a costume for adults and not a toy. Not suitable for children under 12 years. Can contain small parts that can be swallowed - danger of suffocation. Keep away from fire and open flames.