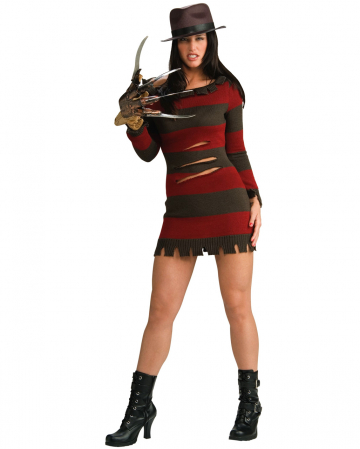 Mrs.Freddy Krueger costume, so sexy you have never seen Freddy!

So Freddy no longer has to own the Tennagern awake at night, there is now the Mrs.Freddy Krueger costume for you! Freddy Krueger, aka the Springwood Slasher from the US hit movie A Nightmare on Elm Street, is one of the most famous serial killer of US cinemas.Now he was revived by the remake of Wesley Strike in April 2010! Properly famous Freddy Krueger was his sadistic murder tool he himself has crafted from an old leather work glove, copper pipes and sharp steak knives together.So sexy as with this woman costume you have Freddy never seen!