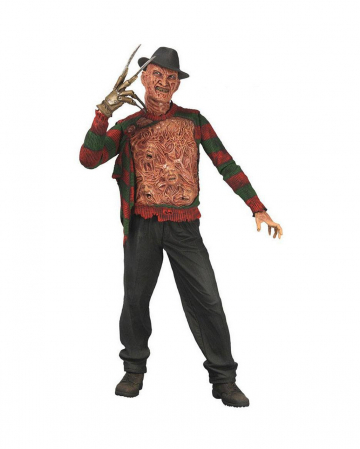 Item #: 38570
❤  Add to wish list
(0)
UnavailableOrder fast! Only a few items left Available
Fitting for this:
Add the product directly to your basket by clicking the checkbox

Get a beautiful collector's item from the "Nightmare" horror movie series by Wes Craven with our Nightmare on Elm Street Freddy Krueger action figure! The detailed designed fan article in the shape of the horror cult figure Freddy Krueger is an absolute must-have for every collector and a great gift idea for slasher fans!

The Nightmare on Elm Street Freddy Krueger action figure has a size of about 18 cm. Essential characteristics of the ruler of nightmares such as the clawed hand, the floppy hat and the red-green striped sweater are found in your Nightmare on Elm Street Merch. Interchangeable hands and heads as well as the Elm Street House to set up harmoniously round off the Freddy gift item. The sweater can be folded to the side to reveal the tortured souls in Freddy's "Chest of Souls"! The Freddy Krueger action figure is delivered in a deluxe collector's box with an opening window. Even more horror movie collectibles like this one Freddy Krueger Glove Classicand this one we also Freddy Krueger Pullover XLhave at Horror-Shop.com!

The article is not a toy. Not suitable for children under 3 years. May contain small parts that can be swallowed - danger of suffocation. Keep away from fire and open flames.