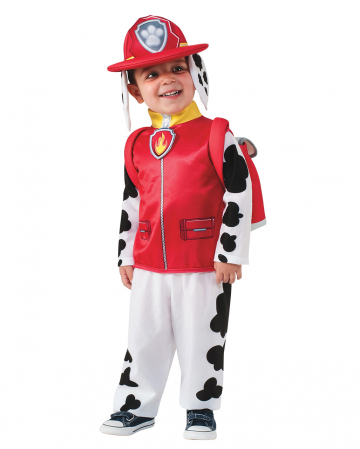 As a member of the animal Paw Patrol your child becomes a little hero with the Paw Patrol Marshall child costume! The dog patrol consists of six faithful four-legged friends who rescue their animal and human friends from every emergency. With the Paw Patrol license costume your offspring can now slip into the role of his serial hero and perform heroic deeds together with his friends. Marshall is a somewhat clumsy Dalmatian with a heart of gold!

The Paw Patrol children costume is a jumpsuit with cap and backpack. It is based on the character of the Dalmatian Marshall, who likes to drive around in a fire truck and is also a pretty cool guy. Order Paw Patrol disguises at Horror-Shop.com: Here you can also find the Paw Patrol Marshall Children Costume