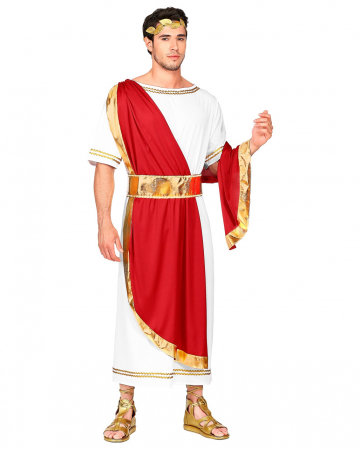 Item #: 39226
❤  Add to wish list
(0)
from 26,99 €incl. VAT, plus shipping
UnavailableOrder fast! Only a few items left
Delivery until 20.10. possible**
Available
Delivery until 20.10. possible**
** Only for deliveries inside germany, information about other countries can be found here
Fitting for this:
Add the product directly to your basket by clicking the checkbox

The Roman Emperor costume gives you the charisma of a real Roman emperor. Hail Caesar was yesterday. Today you are in power! Even without Roman forces at your side, you'll take the carnival by storm. Your Roman costume toga flutters when you rock the dance floor as a man of office and dignity. Soon a multitude of pretty ladies will gather around you. Choose who will be your new Cleopatra.

The Roman Emperor costume is a stylish Roman tunic that will turn you into a Roman emperor. The toga is white and has a red sash. The golden hem gives the carnival costume a noble appearance. Just like the golden laurel wreath, which belongs to the costume set. The belt completes the Roman costume, which is available in different sizes from S to XXL.

The article is a costume for adults and not a toy. Not suitable for children under 3 years. May contain small parts that could be swallowed. There is then danger of suffocation. Keep away from fire and flame.