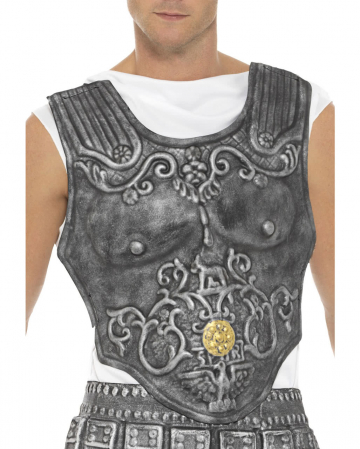 Dress up with the combat equipment as a brave Spartan

Our Roman gladiator breast armor is an excellent cave for antique costumes. Dress up with the carnival armor at Fastnacht and on historic motto parties as legionary of the Roman Empire, antique warrior and brave gladiator!

The Roman gladiator breastplate fascinates with its beautiful appearance. Silver and gray elements are immediately recognizable as antique armor, while black discolorations underline the martial look. With the help of several Velcro fastenings, you can adjust your carnival armor to the desired narrowness. Several decorations in silver and gold adorn the legionary armor, including important symbols of the Roman Empire, such as the standard with eagle and the inscription "SPQR", as well as a portrait of the mythical wolf, who according to legend sucked Romulus and Remus. This is a good fit Roman Gladiator's Skirt and a Roman Sword ,

The item is a costume accessory for adults and no toys. Not suitable for children under 12 years. Can contain small parts that can be swallowed - danger of suffocation. Keep away from fire and open flames.