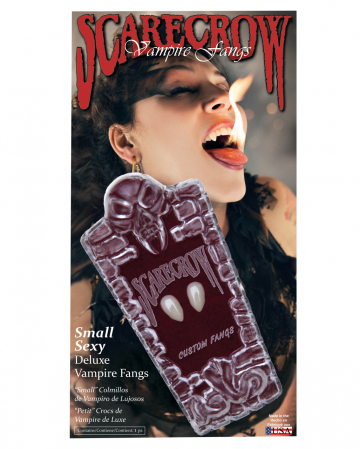 Patented Scarecrow Vampire teeth of the stars of Twilight and True Blood!

The Scarecrow Lady Fangs here in small design, especially for small or Vampire Girl which normal Scarecrow canines often are too big! The ingenious Scarecrow Lady Fangs Vampire Fangs as with US patent, are the classic among the Fangs and are also used by the actors of Twilight, True Blood and Vampire Diaries!

Warning Warning! Only suitable for use by adults, not toys for children! Not suitable for children under 14 years.Contains small parts that can be swallowed or inhaled.Adult supervision is required.

Especially since the appearance of the vampire series Twilight and True Blood have become even more popular vampire costumes on Halloween and carnival.Against this trend vampires were known across cultures objects of magic and from earlier traditions.For the first time they talked about vampires in ancient stories from Eastern Europe and the Balkans, where from bloodsucking demons is talk.But only since the novel by John Polidori's The Vampyre of 1819 and later Bram Stoker's famous work Dracula the vampire is considered modern horror figure.

Nowadays vampires are indispensable for a successful Halloween or carnival party.Although the appearance of vampires has changed over time, then the demon creatures from folklore and today, thanks to Edward Cullen in the Twilight Saga blockbusters, all vampires on the time always have one thing in common, the acute Fangs were always an integral part of the Vampire.If you want to dress up this year as a vampire, so you need realistic looking and convincing Scarecrow Lady Fangs Vampire Fangs suck blood!