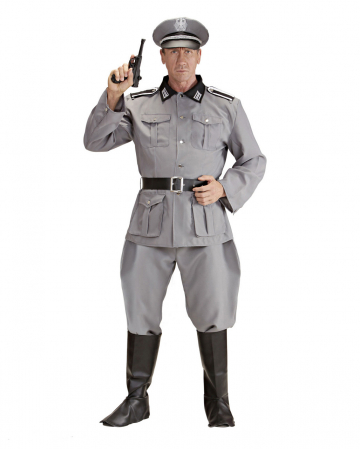 Care with the soldier uniform for impression and discipline

A stern looking soldier's uniform stands worldwide for discipline and order and is the workwear for men and women who defend their country. Each unit has its own uniform and can be identified and distinguished by the colour and cut of its uniform. No matter whether you want to serve in the Air Force, the Military or the Navy with your costume uniform, each unit has its own special uniform. With a soldier's uniform as a costume you become a member of a playful army.

Become a captain, sergeant or lieutenant with our grey soldiers' uniforms and make an impression and gain respect with your appearance. With a fantasy uniform, like the one of our soldiers uniform, you will definitely cause a stir. The gray soldier uniform is composed of a gray jacket with badges on collar and epaulettes, as well as gray pants in Breeches design, a black leatherette belt, uniform cap with eagle and black boot gaiters. Additionally, the uniform can be combined very well with oursGeneral Army Coat M.

Attention: The article is a costume for adults and not a toy. Not suitable for children under 3 years. May contain small parts that can be swallowed - danger of suffocation. Keep away from fire and open flames.