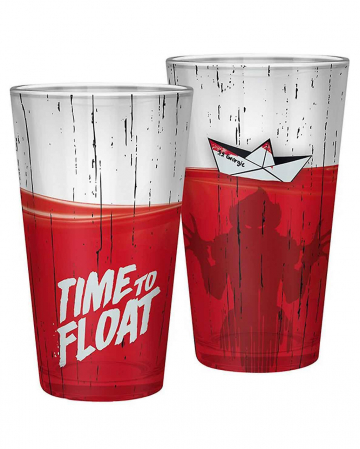 The Stephen Kings ES - Time to Float drinking glass provides a good portion of horror at the table. Pennywise, the horror clown from Stephen Kings ES, is hiding. Only his scary silhouette is visible in the sea of fresh blood. He has raised his claws, is already about to snatch his next victim. It's time to levitate. Time to get spooked. Time to have a glass of orange juice? Whether you like the original or the remake, if you're a Stephen King fan, you'll love this creepy drinking glass with IT motif!

The Stephen Kings ES - Time to Float drinking glass has an extra large capacity of around 4o0 ml. The ES Pennywise motif on the glass is an ingenious composition of ideas from the original story of Stephen King. The lower half of the glass is dominated by blood, and the shadowy figure of the horror clown can be seen in the background. On top of it floats a small paper boat, like the boys from ES made it. The saying "Time to float" is another scary element. Of course, the glass is also a great gift for all Pennywise and Stephen King fans.