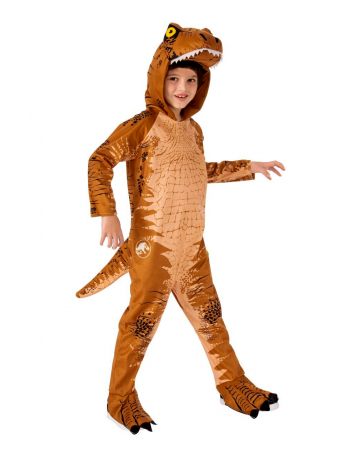 With the T-Rex children's costume with hood brown you will become a horror from the Cretaceous period. Deep in the chalk, however, are only the others. As a T-Rex, you panic as you roam the streets with your loud roar. On Halloween, as a broken out resident of Jurassic Park, you'll be making sure you get a full bag of candy. And even on the carnival procession, the camels fly like this. Nobody wants to mess with a T-Rex dinosaur.

The T-Rex children costume with hood brown captivates by a great optics, which transforms you into a cuddly variant of the fright of prehistoric times. The disguise is simply the hit at the children's carnival or at the costume party. The costume consists of a soft and comfortable overall in the typical brown dino look with a light brown pattern on the belly. The great colouring is supported by the realistic looking dinosaur paws on the boot tops and the smart dinosaur tail with serrated pattern. When you put on the hood of the animal costume, you'll see the scary teeth and wildly determined eyes of the dinosaur costume.