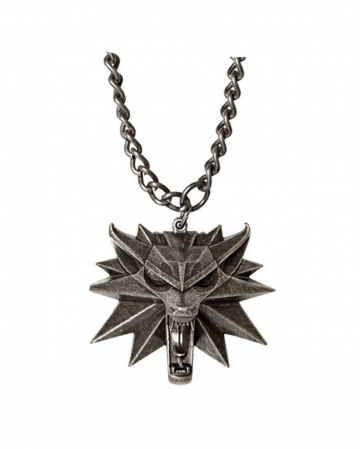 The successful action role-playing game "The Witcher" has also been available as a Netflix series since 2019 and tells the story of the witch Geralt von Riva. As a monster hunter, he has to face nasty beasts and evil magic creatures. His trademarks are his white hair and the two swords he always carries on his back. The Hexer Medallion, which symbolizes the Witcher Brotherhood, is now available at Horror-Shop.com. Our The Witcher Wild Hunt Medallion with LED eyes is an antique-look medallion showing a battle-ready wolf's head with glowing eyes.

Your delivery includes the magical The Witcher Wild Hunt Medallion with LED eyes. The Wild Hunt necklace comes with a metallic wolf head whose eyes can glow. The Wild Hunt medallion is a licensed The Witcher fan article, which convinces with its particularly realistic and detailed workmanship. The total length of The Witcher necklace is approx. 76 cm. Also discover our very popular The Witcher figures, such as the The Witcher 3 Wild Hunt Ciri Figure 20cm