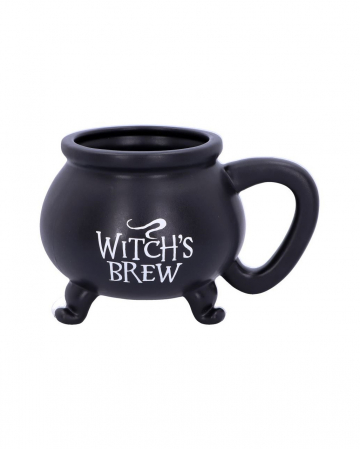 The Witch's Brew cauldron mug is a great gift idea for fantasy fans! With the Witch's Brew cup as a witch's cauldron your drinks will get that certain spark of magic and taste much better. It is a magician's cup in magic cauldron design. The white "Witch's Brew" lettering is contrasted on the black background - a brilliant magician's gift!

The Witch's Brew witch's cauldron cup is a black porcelain cup in the shape of a magic cauldron. The cup stands on three small feet and is painted with the inscription "Witch's Brew". It is about 13,5 cm high and a nice gift idea for gothics, magician fans and Harry Potter lovers. Also discover ours Harry Potter Cauldron Mugfor fans of the Hogwarts student!

The article is a decoration article. Keep away from fire and open flames.