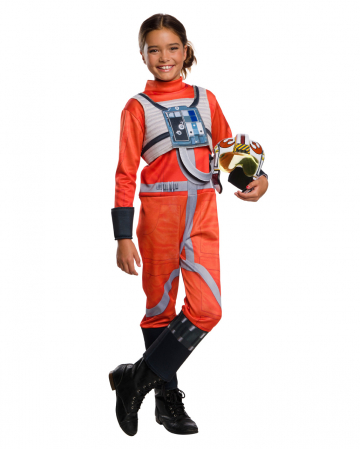 Item #: 31524
❤  Add to wish list
(0)
Reduced from 29,95 €incl. VAT, plus shipping
UnavailableOrder fast! Only a few items left
Delivery until 11.04. possible**
Available
Delivery until 11.04. possible**
** Only for deliveries inside germany, information about other countries can be found here
Fitting for this:
Add the product directly to your basket by clicking the checkbox

The role of the brave pilot who defends himself against the dark power of Darth Vader is written for your offspring. Therefore the X-Wing-Fighter Pilot costume is also the ideal costume for little Star Wars fans. The tough pilots are known for their courage and love of daring flights. So your kids have as much fun at the carnival party as at the children's birthday party with Star Wars motto. With the original Star Wars costume there will surely be a lot of action when the kids support "The Last Jedi". May the power also be with them on the carnival procession and bring them delicious camels!

As a legendary super pilot the fun is guaranteed. With the licensed X-Wing Fighter Pilot costume your offspring belongs to the Star Wars Empire! The costume is wearable as unisex disguise for both boys and girls. The jumpsuit, which is the heart of the pilot's fairing, is easy to put on. The basic color is orange, like the real X-Wing Fighter pilots. The printed modules in silver and blue in the chest area and the black straps are great details that make this Star Wars costume the ideal costume accessory for the motto party. Just put on your helmet and your child can take off. You will find many more licensed articles from the universe of Han Solo and Princessine Leia. So you can also send your child with the Clone Trooper Child Costume Set to the children's carnival.

Attention: The article is a costume and not a toy. Not suitable for children under 3 years. May contain small parts that may be swallowed - risk of suffocation. Keep away from fire and open flames.