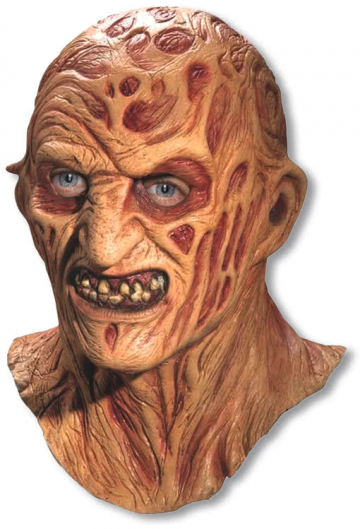 When a disfigured by burn scars killer with razor sharp blades on the glove behind teenagers ago, it may be just about the original film character of Wes Craven's "A Nightmare on Elm Street" Fredd Krueger.With the fantastic horror mask of Freddy Krueger as a latex mask you take on the role of actor Robert Englund.1, 2, Freddy passes - 3, 4, occlusive merely your door - 5, 6, take your crucifix - 7, 8, sleep 'not one by night.,,Who does not know the nursery rhyme of Freddy Krueger, the Böhse Onklez inspired even a song.

Here the original Freddy Krueger mask comes from the film "A Nightmare on Elm Street", which belongs to the cult classic among horror films.The newly revised Halloween mask made of fine latex can also degenerated up to nasty pizza face with slate nose and turn into a nightmare of teenagers.The Freddy Krueger Latex Mask is painted very detailed and for the competitive price a real bargain! Matching accessories such as the Freddy Krueger Metal Glove Deluxe , the Freddy Krueger Slouch and the Freddy Krueger Pullover Deluxe you'll find in our shop.

The Faithful Freddy Krueger Latex Mask with typical burn scars covered the entire head and the neck, making it a must for all Nightmare on Elm Street fans.Cool mask and a great costume accessory for Freddy Krueger Sweater order at the end even perhaps against Jason Voorhees to fight?