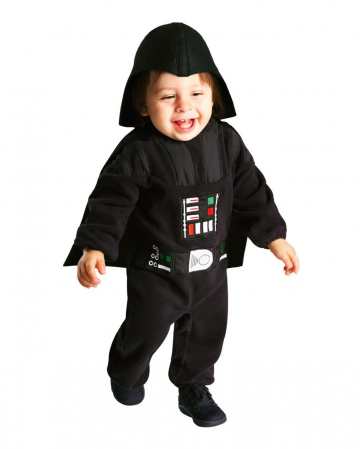 Sweet little Darth Vader becomes the popular war of star heroes on Halloween or at children's carnival. With the licensed Darth Vader toddler costume, you'll make your little treasure the center of the carnival universe. The dark guy from the famous Star Wars has never looked so cute. Everybody would like to cuddle up with him or give him some extra sweets.

May the Force also be with him during the Carnival procession and bring in lots of delicious camels! The ingenious Darth Vader toddler costume consists of a comfortable black jumpsuit, which is equipped with a removable cape. The chest area is equipped with the futuristic buttons typical of Anakin Skywalker alias Darth Vader. The black cap completes the cool look of the villain from Star Wars.

The article is a costume and not a toy. May contain small parts that may be swallowed - danger of suffocation. Keep away from fire and open flames.