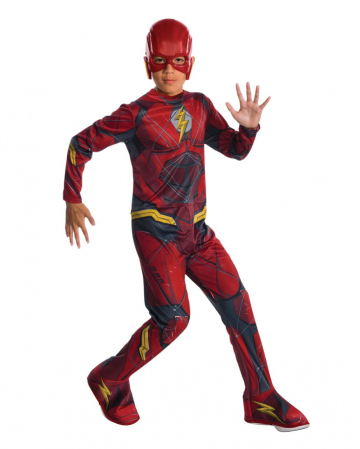 The Flash, aka Barry Allen, is a DC Comics superhero. His most notable ability is that he can move at superhuman speed. As the "fastest man in the world", the so-called "Speedster" is presented in numerous comics, as well as in the successful TV series before countless tasks. The universe does not save "The Flash" but single-handedly. His superhero colleagues include Batman, Superman, Wonder Woman and Aquaman - they all belong to the "Justice League" and have to save humanity from the evil plans of nasty villains. With the Flash Kids Costume, your offspring transforms into the lightning-fast superhero from the successful comic series. Be quick as well, and order today the ingenious Justice League costume for cool costume parties!

The flash kids costume consists of a red jumpsuit with shoe covers and a half-face mask with eye openings. The DC Comics superhero costume for kids is a cool disguise for carnival and Halloween. You get the flash panel alternatively in SL size. Other license costumes, masks & wigs you can find in our online shop. The Flash Deluxe Kostüm Justice League you will also find in our assortment.