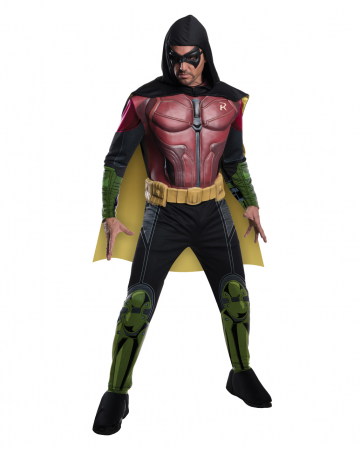 Wear the Robin Muscle Costume Arkham City as you go to the next comic convention, or to the upcoming Halloween party. The original Robin superhero costume with muscles is an ingenious licensed article from the DC Comics series. As a loyal assistant to Batman, you kill common villains and defend Arkham City in the final showdown. The superhero muscle costume comes with cool extras that make you look very convincing. Not only the padded robin jumpsuit, but also the realistic mask will make your appearance look incredibly authentic.

Attention: The item is an adult costume and not a toy. Not suitable for children under 3 years. May contain small parts that can be swallowed - suffocation. Keep away from fire and open flames.