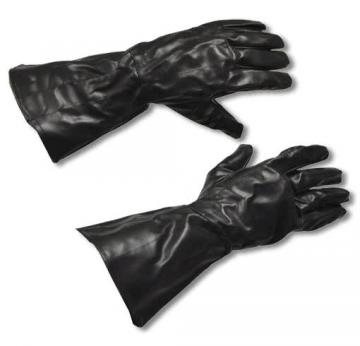 Darth Vader is the nemesis character in the Star Wars film series and probably one of the most infamous villains in movie history.

Darth Vader used to be a Jedi Knight but the evil Emperor Palpatine lured him into his service and he succumbed to the dark side of the force.  During hias fight against his former teacher and friend, Obi-Wan Kenobi, Vader was gravely injured and lost his limbs. But he is saved and put into into a black, mechanical suit of armour and helmet that keep him alive.

The black Darth Vader Gloves match the famous armour and make your Star Wars look complete and you can go and fight the orer of the Jedi. The officially licensed Darth Vader Gloves are made of black imitation leather. The decorative stitching makes these film gloves look really impressive.