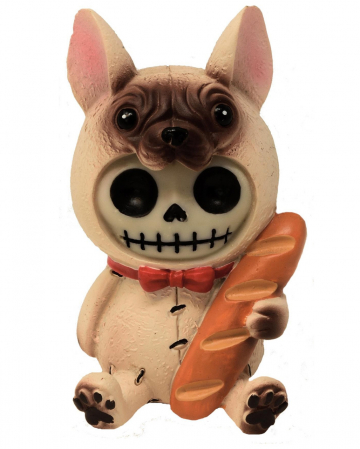 Item #: 38751
❤  Add to wish list
(0)
UnavailableOrder fast! Only a few items left Available
Fitting for this:
Add the product directly to your basket by clicking the checkbox

Who let the dogs out? The French Bulldog - Furrybones figure Klein shows one of the mega popular artificial stone mythical creatures, which has disguised itself as a dog. More precisely as a French bulldog with a skull face. The cute decoration figure is a great gift idea for gothic fans and francophile collectors. There, the cute little skeleton figures with a penchant for weird costumes have long enjoyed cult status and are a much sought-after collector's item.

The French Bulldog figurine Klein is a high-quality Gothic collector's figurine made of cast stone. It is about 8.5 cm high and makes a great Halloween decoration, where you look twice. The dog mask with ears and the muzzle of a French bulldog serves the cute Furrybones figure as a funny masquerade. So she sits there grinning and carries the typical French baguette in her hand. At second glance the skull face of the typical Furrybones skeleton figure reveals itself. More cute guys from the series are available in our shop.