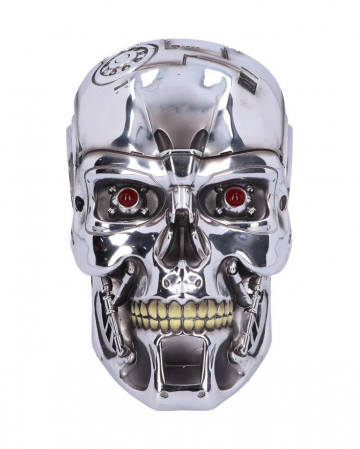 The Terminator 2 T-800 Skull Wall Relief is an ingenious gift for all fans of the legend among Sci-Fi heroes. The Terminator from the second part of the famous movie series is the undisputed number one. The cool skull made of polyresin reminds you of it. The T-800 Terminator head, as a combat robot, has thrown off all human flesh, with the exposed hydraulics placed over a metallic skeletal structure that mocks humanity. Glowing red eyes stare straight ahead without batting an eyelid. The artificial teeth show a supernatural grin.

Give the Terminator 2 T-800 Skull Wall Relief to a fan as a present or make yourself a pleasure as an Arnold Schwarzenegger fan. The officially licensed T-800 skull from the Terminator 2 was sent from the future into the past and can be mounted on the wall as a wall relief. The skull is cast out of high-quality polyresin and carefully painted by hand. With the Terminator Skull your home is perfectly protected from the threat of other androids like the T-1000.