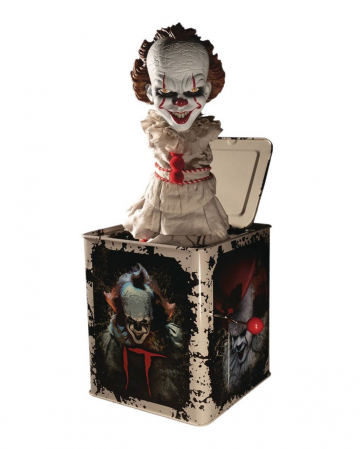 Item #: 38566
❤  Add to wish list
(0)
UnavailableOrder fast! Only a few items left Available
Fitting for this:
Add the product directly to your basket by clicking the checkbox

This ES Pennywise Burst-a-Box collector's figure from the remake of Stephen King's "IT" is an impressive gift for all Pennywise fans. The creepy horror clown Jumping Devil comes from Mezco's "Burst-A-Box" series and definitely belongs on every horror movie collector's shelf! From Derry, the Pennywise Jack-in-the-Box figurine comes straight to your home - gift box included!

The article is for adults and not a toy. Not suitable for children. May contain small parts that can be swallowed - danger of suffocation. Keep away from fire and open flames.