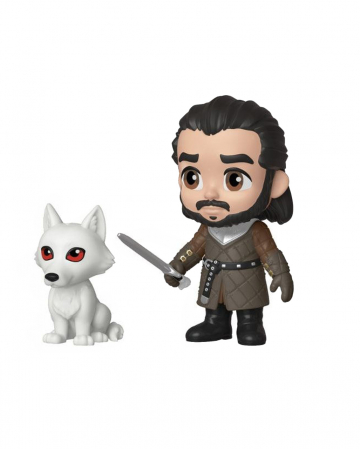 With the Funko 5 Star vinyl character Jon Snow you'll make a Game of Thrones fan happy. John Snow is the declared favourite of the GoT fan community. As a descendant of the house of Stark, the commander of the Night's Watch makes his way to the dragon mother Daenerys Targaryen. The song of ice and fire is heading towards its climax. Also the Funko John Snow figure, which inspires as a figure set with the white shadow wolf, is an absolute highlight in every GoT collection.

The little Commander of the Night Watch is very proud to be on the shelf of a GoT fan. The Funko 5 Star vinyl figure Jon Snow is equipped with many beautiful details. The hairstyle and eyes were inspired by the real Nordmann. Also the cape with belt and the sword, which the descendant from the house Stark holds in the hand, are affectionate details, which constitute the charm. In a double pack with the ghost, the faithful shadow wolf of John Snow, the great gift box is simply irresistible for anyone who loves the adventures of Jon and Daenerys Targaryen. More cool fan articles for fans of the stories of George R. R. Martin like that Daenerys Targaryen Keychain Pocket POPyou can find in our shop.